This is my annual Thanksgiving "best wishes" cartoon to my Downriver readers. Without all of them, there would be no local editorial cartoons in The News-Herald. For more than 31 years, I've been fortunate to celebrate their successes, share their struggles and comment on Life Downriver. I'm forever thankful for that opportunity - and for my readers!
That's the Point! 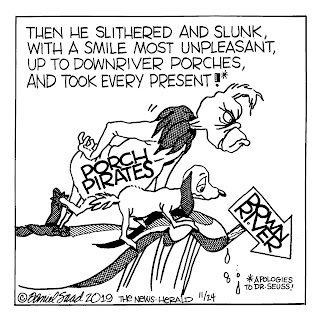 Also on the Drawing Board this week: I reminded Downriver readers that while they're happily shopping online to make holiday wishes come true, there are those within the community - with hearts two sizes too small - plotting to steal those special gifts right from their porches!

One of the best things about living in Michigan is the changing of the seasons, and we can always be sure that as the leaves turn in autumn, our politicians will turn on each other in budget season.
That's the Point!
Posted by Dan Saad at 9:40 AM No comments:

With Michigan's ban on flavored vapes taking effect at the start of autumn, at least we're spared a little bit of pumpkin spice in the air!
That's the Point!
Posted by Dan Saad at 4:41 PM No comments:

Cartoon of the Week: 'Tasteless' Vaping

We've legalized marijuana, but now banned flavored vaping. It's important to protect the health of minors - I'm a father and grandfather, so that's my concern as well. But I wonder if tighter enforcement might have been the answer. Don't come after my maple flavored Crown Royal!
That's the Point!
Posted by Dan Saad at 9:56 AM 1 comment:

Cartoon of the Day: It's Complicated

With the passing of L. Brooks Patterson, the longest-serving Oakland County Executive, many people in the metro area are thinking about his complicated legacy. A champion of Oakland County and proud of the team of professionals he recruited who guided the county to financial stability and growth, he was a controversial - often divisive - figure as well. My relationship with him was complicated too. Beginning in May of 1984, he never hesitated to let me know if he disagreed with one of my editorial cartoons. He never complained about them - he just let me know I was wrong.

That said, he also appreciated the role of editorial cartoonists - he even had a couple of my originals; and I was always happy to support The Rainbow Connection, the children's charity he founded in 1985.

And it gets more complicated. As a corporate communications director for Tier 1 automotive suppliers from the late 1990s until 2017, I worked closely with him and his team on economic development and international business issues in Oakland County. He was a sincere and enthusiastic supporter of Oakland County businesses.

L. Brooks Patterson was one of a kind - and that certainly means different things to different people. One thing's for sure - it's going to be different without him. Especially for one local editorial cartoonist.
That's the Point!

Cartoon of the Week: Powerless!

Summer in metro Detroit has its seasonal challenges - humidity, thunderstorms, the occasional threat of a tornado and ever mosquitos on warm summer nights. But, no matter what Mother Nature throws at us at this time of year, the most frustrating seasonal challenge (especially when it threatens the food in your refrigerator/freezer and means sleeping without air conditioning) is being powerless. No "juice," gone dark. Sometimes it's understandable - high wind, a down tree … sometimes, however, it's unexpected and - apparently to us - inexplicable. And, when we can't get accurate information about when it might be restored … well, that brings me back to being "powerless!"
That's the Point!
Posted by Dan Saad at 10:27 AM No comments:

Freedom: A Gift and a Responsibility

The freedom that is the cornerstone of our independence is both a gift and a responsibility. It is a gift from the founders of the United States of America and all those throughout the centuries who have nurtured and defended it. It is a responsibility that we all have to nurture and defend, and to pass on to generations to come.
That's the Point!
Posted by Dan Saad at 6:11 PM No comments:

Cartoon of the Week: Got You Covered (?)

In Michigan, we all know that auto insurance is expensive - too expensive. We also know there's a lot of debate regarding levels of coverage, "regional" pricing and related issues. Well, thanks to the bipartisan hard work of our legislators, all that was fixed with the recently passed auto insurance reform legislation. Now, premiums will go down, and we're still covered! Uh … right?
That's the Point! 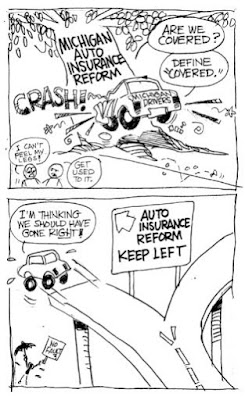 Off the Drawing Board: This week's cartoon was a true collaborative effort with my CDB editor, Mike Lee. From these two original concept drawings, I took elements that became a much more effective presentation of the issue. The "hanging in the air" visual reinforces the uncertainty regarding this reform package; and the edited secondary gag more effectively supports the punch line.
Posted by Dan Saad at 11:03 AM No comments:

Cartoon of the Day: Signs of Spring

It's the vernal equinox and we're all looking for signs that spring has, indeed, arrived. There are many signs of the season all around us (and not only Downriver, everywhere throughout metro Detroit) - just some more welcome than others!
That's the Point!
Posted by Dan Saad at 2:29 PM No comments:

My dad worked on one of Mr. Dingell's early campaigns decades ago, when we lived in Riverview. I remember my dad hand-lettering placards for local stores, barber shops, etc. Later, as campaigns became more sophisticated, my dad remained a solid supporter - passing out handbills and brochures door-to-door and attending neighborhood rallies. It was at a neighborhood "block party" type event that I remember first meeting him, when I was a pre-teen. Throughout my cartoon career, I was fortunate to have the opportunity to meet him a few more times. Of all the political figures who've appeared in my cartoons, I believe he's the only one that I never lampooned. His integrity, his dedication to the people of his district, and his love of this county always guided him. Even if, (very) occasionally, I disagreed with one of his positions or opinions, it was nonetheless worthy of respect.

With his passing, I'm afraid we've lost the last of our statesmen; the last of a generation that understood that the political process is about listening, understanding and sometimes agreeing to compromise to achieve a solution.

This was a hard one to draw, on so many levels.
Posted by Dan Saad at 7:30 PM No comments:

Today's Cartoon: So Cold, It's Not Funny!

Several days ago, when I drew my annual Groundhog Day cartoon for The News-Herald, I joked about the coming snowfall (which hit us Monday) and bitter cold (which moved in last night). Now, in the midst of it, it's clear that it's SO cold, it's not funny! Be smart and careful if you must be outside. This is the coldest it's been in many of our lifetimes - dangerously cold.
That's the Point!
Posted by Dan Saad at 10:55 AM No comments:

Today's Cartoon: Back to Normal, Whatever It Is

The new year really begins today, right? You can't count a national holiday, when everyone's recovering from New Years Eve celebrations and watching meaningless college bowl games as day one. So - today we're back to normal. Wall Street is holding its breath, the president has unleashed another Twitter storm and here in metro Detroit, auto workers and newspaper staff members are awaiting word on layoffs. Normal has gotten more stressful than the holidays!
That's the Point!
Posted by Dan Saad at 10:32 AM No comments:

Early deadlines - especially over the holidays - are a fact of life in the newspaper business, so my "first" cartoon of 2019 is dated 2018. Nonetheless, the best wishes for a Happy New Year are timely. This cartoon closed my official celebration of 30 years of editorial cartooning for The News-Herald. It was fun looking back, but tomorrow it's back to the drawing board. There's a 31st year to begin!
That's the Point!
Posted by Dan Saad at 2:54 PM No comments: