CARTOON of the DAY: Pushmepullyou Politics

A charming character and concept for a children's story, certainly. The way to solve the many problems facing the City of Detroit? I think not. How about a completely different character concept - Allpullinginthesamedirection?
That's the Point!
Posted by Dan Saad at 10:38 AM No comments:

CARTOON of the DAY: School Daze


Summers here, but the lessons continue for kids, even though school is out. Some, of course, more serious than others. To all the kids - enjoy your summer and make the most of it. To all the parents - take time to enjoy the summer yourselves ... the time you spend with the kids will make memories to last a lifetime.
That's the Point!

Off the Drawing Board: To all my readers Downriver, in Dearborn, Dearborn Heights, throughout the metro Detroit area and worldwide on the Internet - I'll be away from the drawing board for a couple of weeks on an international trip. I promise to be back by July 1 with a sharp pencil - if not a sharp wit! My best to you all!
Posted by Dan Saad at 10:20 AM No comments:

CARTOONS of the DAY: To Dad(s) With Love


My daughters treated me to my annual Father's Day trip to Greenfield Village for the Motor Muster. For hours they pretend to be interested in classic cars and they pretend to find my "When I was a kid ..." stories fascinating. What better gift could a dad get? I wish all the dads in my reader audience a Happy Father's Day!
That's the Point!
Posted by Dan Saad at 9:20 PM No comments:

CARTOON of the DAY: Weather Or Not ...

No matter the season, our local weather forecasters have a gift for turning routine seasonal weather into the storm-flood-blizzard-of-the-century (depending upon the time of year) ... day after day, week after week. The summer forecasts on the way - weather or not you're ready!
That's the Point!
Posted by Dan Saad at 9:28 PM No comments:

CARTOON of the DAY: Shame on You, Whoever You Are!

Wayne County Executive Robert Ficano has had his struggles with issues within his administration and there have been calls for an investigation of him, and even some suggestions that he resign. Amid all this, the Wayne County Commission recently took the courageous step of censure - uh, but without actually naming the County Executive who is the target of the censure! Maybe questionable leadership isn't limited to the Executive's office?
That's the Point! 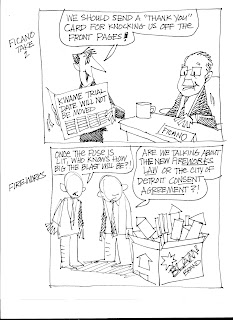 Off the Drawing Board: In addition to the idea above, I offered this take on the situation in Wayne County to my editors at Crain's Detroit Business - including a mention of everyone's favorite former Detroit Mayor! Additionally, I offered an idea tying together the Detroit Consent Agreement and the recently revised Michigan fireworks law.
Posted by Dan Saad at 9:22 PM No comments: