CARTOON of the DAY: Sports Injury

So, you think the guys who lace it up and tape it up, and collide between the lines of the gridiron every week are the ONLY ones who face debilitating injury? Well, think again, pal ... there's plenty of danger to those who sacrifice their bodies on couches and recliners throughout America between now and February 2013! That's the Point!
Posted by Dan Saad at 6:21 PM No comments:

CARTOON of the DAY: Constitutionally Speaking 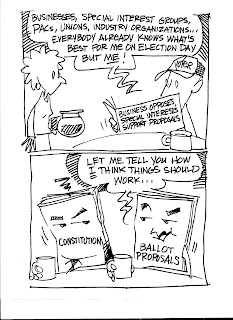 Off the Drawing Board: My roughs to my Crain's Detroit Business editor for September 3 focused on aspects of the upcoming election. As you can see, the rough we developed for this week's edition started a little differently. For the final, I thought it had more impact to show four "ballot proposal" characters (almost implying that the State Constitution is out numbered); but I switched the dialogue to the State Constitution character, to give it a stronger (somewhat defiant) tone to its challengers.

CARTOONS of the DAY: Labor-ing Through the Last Holiday of Summer


If you're like me, Labor Day weekend is a tumultuous mix of emotions - desperately trying to wring the last fun (and relaxation) out of summer, while realizing that the long weekend is our best chance to get a head start on fall chores that will begin piling up sooner than we care to think. Oh well ... fire up the grill and the power washer - it's gonna' be a short long weekend!
That's the Point!
Posted by Dan Saad at 2:49 PM No comments: