CARTOON of the DAY: T'd Off 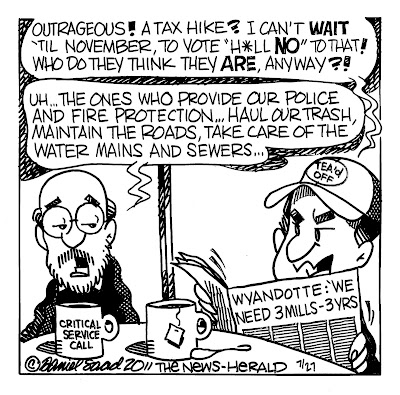 The News-Herald - July 27
Nobody likes to pay taxes, but how do cities maintain critical services - as costs rise and the economy continues to decline - without tax increases? True, those being taxed are often the most negatively effected by the same economic climate as the cities ... I really don't have any answers, but I do know that when I make a call to the police or fire department in my town, I don't want to get an answering machine.
That's the Point!
Posted by Dan Saad at 8:54 PM No comments:

CARTOON of the DAY: Closing the Books 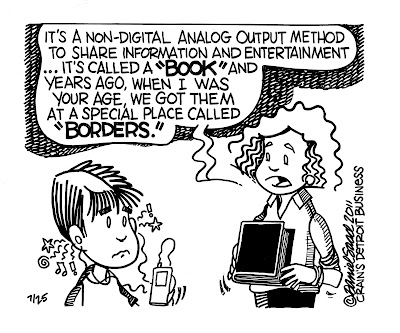 Crain's Detroit Business - July 25
The final closing of the stores in the Borders Books chain is emotionally wrenching. Personally, Borders has been a part of my life for 30 years. Visits to Borders were always eventful - if I was looking for a particular book, I'd always find several others as well. I could hold them, flip the pages, smell the ink-on-paper ... a total sensual and psychological experience. As my son and daughters grew up, the visits became family events and we enhanced the experience by sharing it. I'm certain we'll shift our visits to the surviving chain book store, and we'll continue to visit the wonderful little independent book stores around town, but I have the feeling I need to savor every one of those moments because they may not be experiences I can share with my grandchildren.
That's the Point!
Posted by Dan Saad at 8:43 AM No comments:

CARTOON of the DAY: Fire Emergency 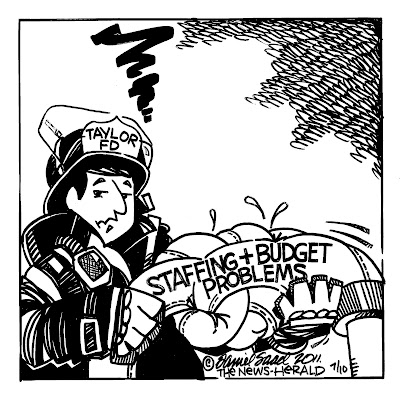 The News-Herald - July 10
The Taylor Fire Department is not the only local agency experiencing budgetary problems, many communities face the same issue. Problem is, "issues" with first responder budgets often become "emergencies" to the communities they serve.
That's the Point!
Posted by Dan Saad at 11:45 PM No comments:

CARTOON of the DAY: Keep On Truckin'? 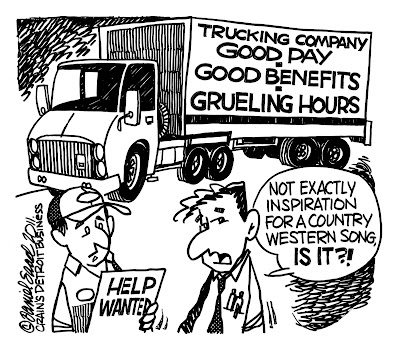 Crain's Detroit Business - July 11
My dad was a trucker and he always wanted me to be a trucker. He used to say, "America moves by truck and you'll never be out of work!" Well, that may be, but trucking itself is hard work and even in today's tight economy, with jobs in short supply, trucking companies are having a hard time getting enough drivers behind the wheels of their over-the-road rigs because of the long hours and grueling conditions. Makes it tough to "keep on truckin'" when you can't find the drivers.
That's the Point! 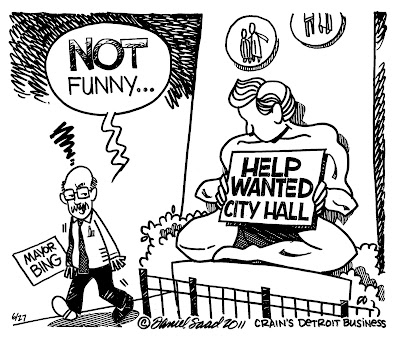 Crain's Detroit Business - June 27
With forced resignations and firings getting so much media attention in Detroit's City Hall, Mayor Bing seems to be having a tough time stabilizing his staff, let alone making progress in improving the city. While this cartoonist remains optimistic about the Bing administration, it would be good to see some team "spirit" Downtown!
That's the Point! 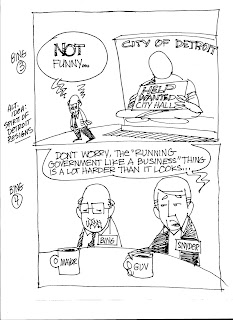 Off the Drawing Board: I offered two different takes on Detroit Mayor Bing's city hall struggles to my editors at Crain's Detroit Business this week. The first, which became the final above, had an alternative gag, with the Spirit of Detroit offering his resignation to the Mayor. My second idea focused on the "run government like a business" theme that both Mr. Bing and Michigan Governor Rick Snyder ran on. While he's had his rough moments, overall the idea seems to be working better for the Governor than the Mayor!
Posted by Dan Saad at 3:59 PM No comments: 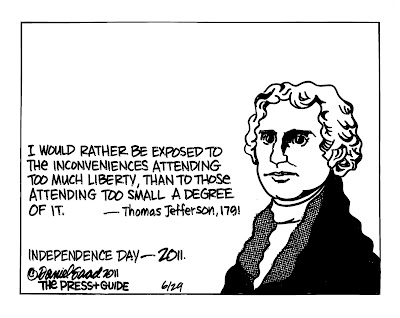 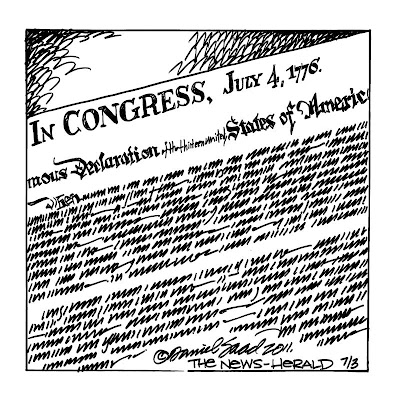 The News-Herald - July 3
Independence Day is too often taken for granted. The basic freedoms sought in the Declaration of Independence, and those guaranteed in the Constitution are the very foundation of our culture and society. But, with freedom comes responsibility to maintain that free society; so, between hot dogs and cold beers - or maybe during the fireworks display - think about what you must do to safeguard the freedom that we enjoy, and that so many have paid dearly to secure.
That's the Point!
Posted by Dan Saad at 11:30 AM No comments: