CARTOON of the DAY: Election or Spelling Bee?

Detroit's mayoral primary election included a number of historic moments, but none as impressive as a write-in candidate finishing first - ahead of the current Wayne County Sheriff! Mike Duggan spent most of the primary election campaign teaching voters to spell his name correctly. Now, it's time to retool his campaign approach from spelling bee to civics lesson.
That's the Point! 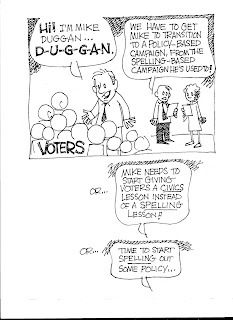 Off the Drawing Board: This cartoon idea was the obvious one, as it was running immediately after the Detroit primary. The dialogue, however, took a fair amount of collaboration with my Crain's Detroit Business editor, Jennette Smith. We ended up with a simplified punch line that didn't compromise the gag (actually, I think it made it better). Thanks, Jennette!
Posted by Dan Saad at 9:30 PM No comments:

CARTOON of the DAY: Vote Like Your (Community's) Life Depends on It!

I penned this cartoon for The News-Herald, and all my readers Downriver, but the message is the same for every community - in Tuesday's primary election, vote like the life of your community depends on it, because it DOES!
That's the Point!
Posted by Dan Saad at 9:20 PM No comments: