CARTOON OF THE WEEK: Michigan State Fair - the End of a 161 Year Run? 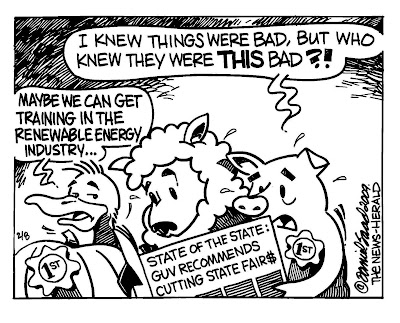 The News-Herald - February 8, 2009
This "Cartoon of the Week" first ran in The News-Herald more than six months ago - in February - when Governor Granholm announced that there would no longer be any budget subsidy available for the Michigan State Fair. News-Herald Editor Karl Ziomek and I share the same summer-end memories of the State Fair growing up and we agreed to this cartoon comment on the prospect of the State Fair going away.
Well, here we are at the end of another summer - number 161 for the State Fair - and we are facing the very real prospect that this is, indeed, the last Michigan State Fair. So, as a tribute to that wonderful tradition I'm re-posting this cartoon.
I'll be at the Fair with my kids, eating corndogs, drinking lemonade, riding the Tilt-A-Whirl, and petting farm animals, just like I've done for the past 50 summers. I'll look for you!
That's the point!
Off the Drawing Board: The Michigan State Fair was a part of my life for as long as I can remember. As a kid, I'd go with my parents and gawk at enormous vegetables, pet animals that I never saw in my Downriver neighborhood, and gobble those gloriously greasy, sugary elephant ears! My dad always gravitated to the new car exhibits and he'd always get himself a new yardstick as he wandered throught the Michigan Mart building. Mom always looked at the baked goods and the knitting and lamented, "I should have entered something this year!"

My favorite "Fair summer" was in 1972 - it was the longest Michigan State Fair ever, 22 days - and I got a job working it! Not a glamorous post, the midway workers got all the attention of the young girls who came to the Fair, I had a somewhat less attractive assignment in the Poultry and Rabbit House. But I was still a Fair worker - with a "State of Michigan" badge and everything! I got to see the Fairgrounds in the misty early morning and I was there late into the night as the animals - and the midway - were bedded down. That's the summer it became MY State Fair. And it always will be.
Posted by Dan Saad at 2:36 PM No comments:

CARTOONS OF THE WEEK: Joe Biden slips, boosts Brownstown - where were all the Dearborn voters? 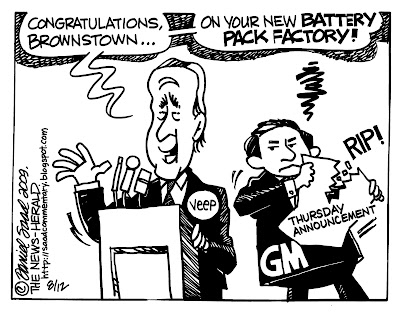 The News-Herald - August 12
In a Detroit area appearance last week, Vice President Joe Biden referenced a GM battery pack factory slated to open in Brownstown ... days ahead of a planned media event by GM to make the announcement! News-Herald editor Karl Ziomek was happy to have a national spin to a local issue when I suggested lampooning the VP's slip-up.
That's the point! 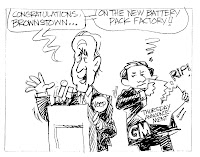 Off the drawing board: I don't often get to feature national figures in local editorial cartoons, so it was exciting to have the opportunity to draw the VP. I had to work on my caricature of him in pencil first - you'll see the inked "Joe" is more refined. 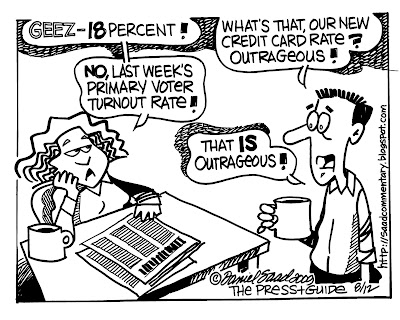 The Press & Guide - August 12
The Dearborn voter turnout - just 18 percent of registered voters - was disappointing to many, including me. Press & Guide editor Tim Powers agreed and I took this approach to highlight that point of view.
That's the point!
Posted by Dan Saad at 10:03 PM No comments:

CARTOON OF THE WEEK: Happiness is ... 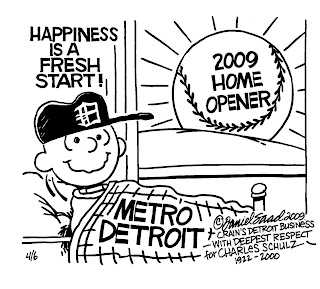 Crain's Detroit Business - April 6, 2009
I can't think of another time of the year that offers the promise of a fresh start more than the start of baseball season - and here in metro Detroit, the start of the Tigers' season.

As the editors of Crain's and I discussed cartoon topics for the April 6 edition, we were in the midst of the series of Detroit's mayoral and council scandals and embarrassments, the pending bankruptcies of Chrysler and GM, and another report of increased unemployment in Michigan.

"What this town needs is a fresh start!" was the overall - and overwhelming - concensus. Coincidently, the Tigers' season opener was the week of April 6 and we had the ideal opportunity to celebrate a much-needed fresh start for the whole town. With that settled, I knew there was no better way to present this than with a tribute to the words and art of Charles Schulz - in my opinion, the most inspirational cartoonist who ever put a pen point to paper.

Well, it worked out pretty well ... the Tigers have been in first place since mid-May, Chrysler and GM have emerged from bankruptcy and are in the process of re-establishing themselves, and we've seen the city of Detroit begin its own re-building process with the election of Mayor Bing and the re-making of City Council. 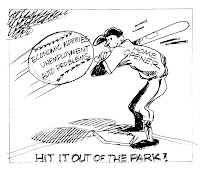 Off the Drawing Board: For every cartoon that appears in print, three or four alternative versions are explored with pencil roughs for the editors to review. Here's the other option that was considered for the April 6 Crain's Detroit Business cartoon.
Posted by Dan Saad at 10:45 AM No comments: