CARTOON of the DAY: Honoring Their Memory 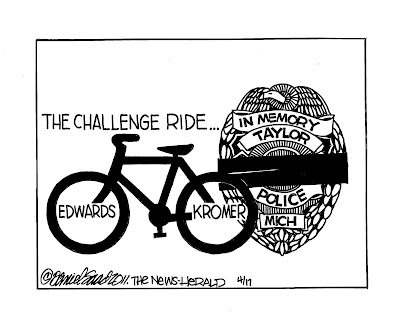 The News-Herald - April 17
Taylor Detectives John MacDonald and Don Farago will bike more than 300 miles, from Ground Zero in New York to Washington D.C., beginning May 10, in The Challenge Ride that is part of National Police Week 2011. They will ride in honor of of two fellow Taylor Police Officers who lost their lives in 2010. This Sunday cartoon honors four heroes - two fallen, and two who remain at watch over their community.
That's the Point!
Posted by Dan Saad at 6:15 PM